Highlights of our Programs 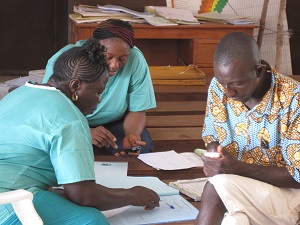 The promotion of Universal Health Coverage is one of the visions in Japan’s Strategy on Global Health Diplomacy. According to the WHO’s definition, the goal of universal health coverage (UHC) is “to ensure that all people obtain the health services they need without suffering financial hardship when paying for them.” AMDA-MINDS, in collaboration with a Japanese consulting firm, has been implementing a JICA project for strengthening of health system of Sierra Leone. The project aims to improve the public health services through the establishment of supportive supervision system in the Ministry of Health and Sanitation. Our other health-related projects in Myanmar, Nepal, Honduras and Guatemala also attempt to contribute to the promotion of UHC by improving accessibility, availability, affordability, and acceptability of the health services in the target areas.

Improvement of Maternal and Child Health 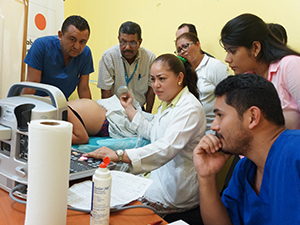 Technical training for doctors and nurses

Targets 3.1 and 3.2 of SDGs specifically articulate the realization of healthier lives of mothers and children. Our program in Honduras has been contributing to achievement of these targets by implementing the following projects. In El Paraíso Department, which is located in the eastern part of Honduras, proper ante-natal care (ANC) had not been provided in the public health facilities due to lack of enough tools and equipment as well as skills to utilize them. Our project has provided 6 health facilities with an ultrasound scanner machine, while conducting a series of training for medical doctors and nurses on practical use of the machine in their ANC services. As a result of the project activities, the number of mothers who received the ANC with an ultrasound diagnosis has increased substantially, which has created a situation where more mothers can spend a healthier and safer perinatal period. The positive effect of the project has been recognized by the local health administration.

AMDA-MINDS has sent the health/nutrition specialist to Madagascar in 2018 as it had been ranked among the lowest group in sub-Saharan Africa and continued literature reviews. On the other hand, it is recognized as a priority country of IFNA (Initiative for Food and Nutrition Security in Africa), and various activities through the SUN (Scaling Up Nutrition) Movement have been carried out in a holistic manner. Thus, it is quite opportune to extract good practices from among those initiatives and learn intervention approaches, operational approaches, degree of community participation and the impact on the intended beneficiaries. It is hoped that the project formulation team be able to visit the country soon so as to kick off the new project. 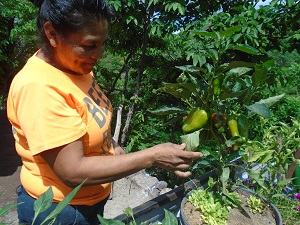 Project for the promotion of home gardening towards nutrition improvement has been implementing in Honduras since August 2017. Vado Ancho Municipality of El Paraiso Department, the target area, is known for its harsh environment. Due to limited rainfall and high temperature, community residents, mostly farmers, have difficulty in producing crops. This leads to less variety of food products, which in turns negatively affects nutritional condition of the local population. In order to tackle this issue, AMDA-MINDS has initiated the project in collaboration with GGUIA, a local partner NGO, which has technical skills of farming and home gardening in such a harsh environment. The project aims to increase the variety of food items, especially vegetables, to be produced by residents themselves in their home gardens.
Activities toward nutritional improvement are also included in the projects in Myanmar which focus on maternal and child health and sanitation, as nutrition is closely linked with health and sanitation. In the projects in Pauk and Lashio Districts, nutrition education and cooking demonstration have been conducted in the target communities.

AMDA-MINDS has joined a JICA project for educational development in Niger which is implemented by a Japanese consulting firm. The “School for All” project is designed to improve quality of primary and secondary education through community participation. The project has been supporting the establishment and function of the school management committee, whose members are selected by a democratic election in communities. With the support of the project, the school management committee plans and conducts such activities as supplementary classes for mathematics and reading/writing by using the educational materials developed by the project.

Support for the Reconstruction Efforts in Nepal 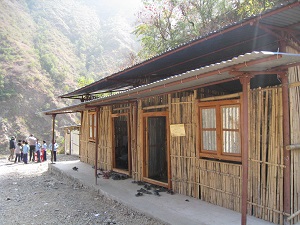 Construction of a temporary school